As I mentioned, I think it’s worth getting a brief look back on the evolution how we got to where we are today. Picking up the story from where we left off: Our team had just formed.  More or less with the skillset diverse enough to build a hardware we had a lot of questions. What should we focus on? What are the milestones to set? Who are the customers?

We decided that we should enter a startup competition and present the concept to a jury. It would provide 2 things for the project: Firstly, it’s an external commitment that forces us to build and deliver something in time. Secondly, there will be some guiding feedback. So we did exactly that, we built “something”.

Meet the “thing”, our very first prototype. Banana for scale

I shouldn’t get into nuances, like the main board being cardboard or the fine crafted details of the blue duct tape keeping the whole thing together. However it did prove a few things. It was able to send a signal to a phone whenever the tip was pushed. In other words: we’ve built a scoring machine on very basic terms. And it was enough to push us to the second round of the competition. More importantly, what we’ve learnt from this experience is that you’ll always have additional features or fixes you want to finish before you “launch”, but actually putting something out there is really what starts momentum.

So preparing for the second round we needed to “commercialize” the thing. Shrinking it in size to fit in a box and basically to be usable for some sort of fencing. We’ve actually designed 2 models for this round. The better one was much smaller, had a rechargeable battery and had far better chips on it however it was so unstable we used the more basic but stable one. (Note that by stable I mean we needed to connect a headset to the phone because the device randomly scored sometimes. So the plan was to disconnect the headset while presenting, pray that it wouldn’t make any sound randomly, then reconnect the headset when we were done. Please don’t tell the jury).

Somewhere in the distance an industrial designer starts to cry

Our chances were weaker than the quick binder on the money clip holding the box together, but it worked! Or at least did not fail during the presentation. The performance earned us third place in the competition which gave us a great push. More importantly we had something that we could start to test on actual fencers.

So the next months were spent on incremental improvements, shrinking the size, going to fencing clubs and collecting feedback.

We visited 2 clubs a week, sometimes even more. Fortunately everyone was very welcoming and the general feedback was very enthusiastic. We got proof that the old way of scoring was really the pain that we understood it to be. Our two main goals were set:to shrink it to the size of 2 matchboxes, and to lay the ground for data gathering. We started to test basic AI models on the data.  We went through a handful of iterations not very different from each other.

I'm glad we left the small coffin design on the left

Even though the app was only for Android it only worked for épée and no grounding feature was available, we had our first customer. A small club next to Budapest decided to order 10 pieces. Sadly we didn’t have too much time to celebrate as it coincided with the worldwide spread of Covid-19. With the clubs closed and most of the indoor activities restricted we didn’t see any other option but to suspend developments.

Few months went by, the restrictions eased and the world started to adapt to the new reality. We started to get more and more messages that wireless sets could be really helpful in order to maintain health standards. So we decided it was time to get back on the project. 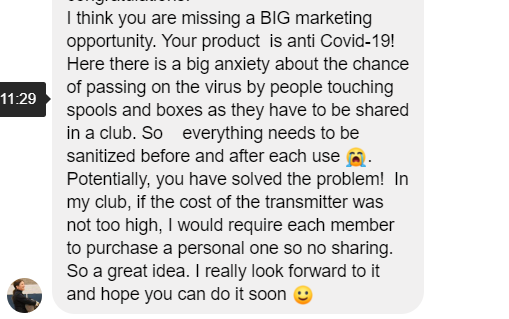 First we put together a comprehensive plan. In 3 months we want to achieve 3 key goals: make the app available on Android and iOS, get bellguard grounding over 95% accuracy on épée, produce and send over 100 pieces of it to clubs. We will cover that in the next post.